Ganesh Chaturthi is awaited with much delight by Hindus around the country. There are many festivities and religious activities which make it one of the most important festivals in India. Prior to the festival of Ganesh chaturthi, people create idols of Lord Ganesh or make puja pandals. On the celebration day itself, people observe their faith through fasting, singing songs, dancing to traditional beats, and bursting crackers while the idol of Lord Ganesh is paraded across the community. As the streets are lined up with devotees of Lord Ganesha to participate in the festivities, many visit the nearest temple of the deity to show their respects. Places such as Maharashtra and Andhra Pradesh are widely known for their colorful celebrations. 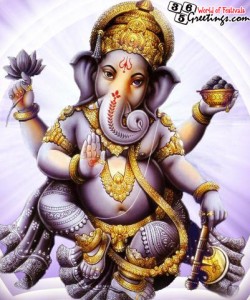 In honor of the diety, many rituals and offerings take place: special pujas are performed at temples, and Modak, his favorite sweet, is offered to him. Devotees fast for a day to show respect, love, and honor to their idol. It is believed that through sincere fasting, believers are blessed by Lord Ganesha with wealth, health, and prosperity. Also, yrat katha, the story told during Ganesha puja, is an important part of the Ganesh chaturthi celebration.

Ganesh Chaturthi legend has it that Goddess Parvati breathed life into idol made out of mud to act as her guard while she was taking a bath. She named him Lord Ganesha, and ordered him to refuse entry to anyone until she had finished. However, her partner, Lord Shiva, arrived to find Lord Ganesha blocking him from entering his home. Because of his anger, Lord Shiva beheaded Lord Ganesha. When Goddess Parvati learned of what he had done, she became so angry that she threatened to destroy the world.

In order to make her calm down, Lord Shiva attached the head of an elephant to Lord Ganesha’s body. But because Goddess Parvati was not satisfied, she asked that her son be worshiped first before the other deities, and thus began the tradition of worshiping Lord Ganesha in the beginning of religious activities in India – which later called as Ganesh Chaturthi festival.